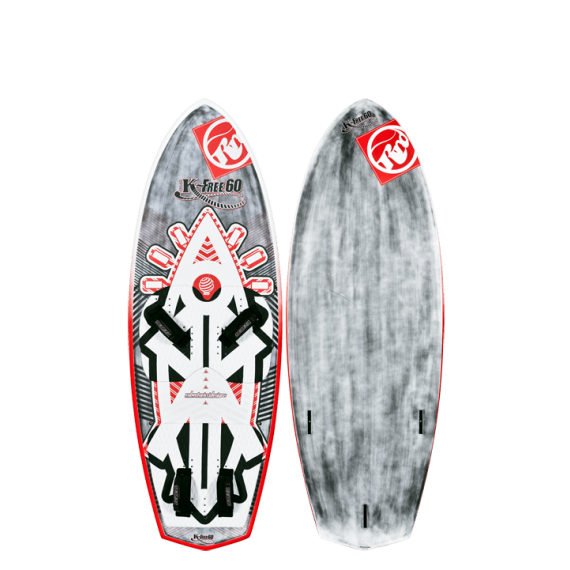 After the development that we have seen in the last 3 years in Kite Racing, with the increased interest of public and media, we have received more and more requests for a new program of boards, that would keep the speed factor with light winds but would be less physical on your legs and easier to ride compared to a Racing Kite board.

The new K-Free 60 is 180 cms long x 60 cms wide. It has a diamond tail to help releasing tail pressure on the water when going downwind with speed, a typical feature of our Kite racing boards. But the k Free is much thinner and narrower, has much smaller fins to allow the board to be ridden by anyone who has ridden a directional board before.

The positioning of the fin boxes , the angle of the front fins and the perfectly trimmed size of them allow the K free to be planing with 8 knots or less, and still be a fast and easy to ride boards with over 20 knots of wind. So we are talking about a range of over 12 knots!
The K-Free is fast but also easy to manouver. You can learn jibing or tacking with it thanks to the wide nose and the narrow tail.
What else to say about this great , fun, and easy to ride board… go try it and smile while everyone else is sitting on the beach.